Parker HealthNet has decided to use Windows 2003 Terminal Services to provide applications for 5000 users at nine hospitals and thirty remote healthcare facilities. Many of their users will need to access applications from multiple client devices. For example, doctors often travel between hospitals and remote medical offices, and nurses will use terminals spread throughout many locations in hospital complexes.

A project team was assembled to create a design for the Terminal Server environment. Their design was based on the current environment as outlined in Figure 6.13. 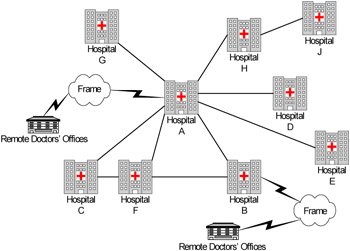 The project team first outlined their objectives. For the Parker HealthNet environment, several objectives were identified, including: 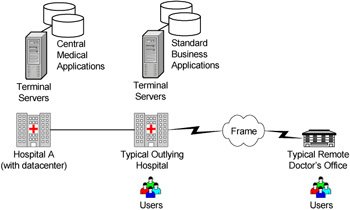 Once these basic design decisions were made, the project team deliberated at length on more complex questions. They were able to consolidate all of their questions into two core issues:

Let's take a look at how the Parker HealthNet project team dealt with these design issues.

To bolster the security offered by the mandatory components of the flex profiles, Parker HealthNet also chose to create policies and apply them to the OUs containing the Terminal Servers to further limit the capabilities of their users.

Now that the project team knew where the Terminal Servers would be located and how they would be accessed, they needed to decide where on the network to store roaming profiles and user data. They knew that they should try to keep the data as close as possible to the Terminal Servers. They decided to create several storage locations throughout the health system, with one storage location at each of the nine hospitals. The exact data location for a specific user would depend on where that user was based. The project team appreciated the fact that just having data stored in multiple locations on the network does not mean each that user's data would be located in multiple locations. It just means users' home folders and roaming profiles would be sprinkled throughout the WAN. 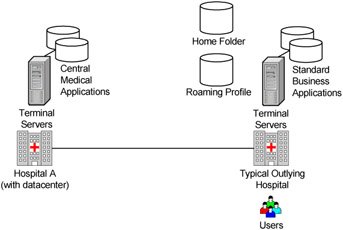 Because some users need simultaneously to access applications from Terminal Servers in the central hospital and their local hospitals, the project team needed to decide where those roaming profiles and home folders would be located. Right away they discarded any notions of using data replication to copy user profiles or home folders to multiple locations throughout the WAN. They knew that by introducing data replication, they would needlessly complicate their environment and waste money on additional storage devices and replication software.

Ultimately, the project team decided to keep the user data at the local hospital site since the medical applications that ran on the central Terminal Servers didn't require access to the users' home folders. They could enable home folder overrides for those servers. As for the profiles, it wasn't a major issue for users with sessions on those servers to load their profiles from their local hospital servers since using the flex profiles allowed the project team to limit the size of the profiles.

Once that was settled, all the project team had left to do was to decide how to deal with users that travel between hospitals. Should those users access applications from local Terminal Servers in the hospital they are visiting, or should they access Terminal Servers from their home sites?

After a brief discussion, the project team decided that traveling users would run applications off of Terminal Servers at their home sites, not the sites to which they traveled. This decision was made for several reasons:

Ultimately, Parker HealthNet was able to successfully implement the Terminal Server environment as outlined. Though it has been only six months since they completed the implementation, patient care has been positively affected. In fact, Parker HealthNet is planning on acquiring two or three hospitals in the next 12 to 18 months, and view their Terminal Server environment as one of the key components that will allow them to quickly integrate the new hospitals into their existing business environment.