Any traffic that crosses a computer network is susceptible to being captured and viewed by unauthorized individuals. Because of this danger, the networks must be secured in one of two ways:

Protecting physical connections is not practical in today's world, especially over the Internet. When addressing network security, most people focus on protecting the data that crosses the network. The common approach is "I don't care if you actually capture my data, because if you do, it will be totally meaningless to you." The networks over which Terminal Server traffic flows are no different from other computer networks. To secure your Terminal Server network, you need to look at two components: 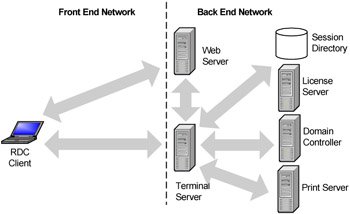 In many scenarios, RDP session communication will travel across both trusted (or internal) networks and untrusted (public) networks. When addressing the security of this RDP communication, you must look at two components: session creation and session use.

Incidentally, you'll notice that during an RDP session, we're only really worried about the keystrokes, not the screen display data. It is highly unlikely that an attacker could capture the screen shot information from RDP session packets. Screen shot captures would require that the attacker crack the binary RDP protocol. Of course, there are many hacker websites with dedicated sections for Terminal Server, so this risk could change in future.

Either way, RDP session traffic must be protected. As with any other type of traffic, the most effective way to accomplish this is with encryption. Encrypting RDP traffic does not make it any harder for an attacker to obtain, but it does render the data unreadable to an attacker. There are two methods by which to encrypt RDP session traffic:

Virtual Private Networking (VPN) software can be used to create a secure, encrypted "tunnel" from the client device to the Terminal Servers. In these scenarios, each user has VPN client software installed locally on his client machine. This software utilizes the user's local ISP and the Internet to connect to the corporate office. Once this secure connection is established, a private tunnel is created connecting the local user to the corporate network. The local user can access the corporate network as if he were attached to the network locally. In actuality, the VPN software on the user's client device connects to the VPN software at the corporate office via the Internet. All traffic that flows back and forth is encrypted by the VPN software. Through this VPN tunnel, the user can launch Terminal Server sessions. The RDP protocol itself is not encrypted directly; rather, it is encrypted by the VPN software automatically.

Figure 12.8: An RDP session encrypted via a VPN tunnel

The major downfall to using these types of VPNs is that the VPN client software must be installed on every single client device. The degree to which this affects a user depends on the VPN software being used. For example, Microsoft's Internet Security & Acceleration Server product offers VPN capabilities, and the client software for it is built in to every version of Windows since Windows 2000. However, other vendors' VPN client software may have to be downloaded to each client device before it can be used, and this can pose a problem on a guest computer.

Imagine you were at a friend's house when your pager went off, notifying you that there was an urgent work-related matter that needed to be addressed immediately. Fortunately for you, your company built Terminal Servers that will allow you to connect from home. You can go to your friend's PC, log on to the Internet, and begin accessing your Terminal Server hosted applications. But, because your company chose to secure their servers with a VPN, before you can connect you must first go to your company's intranet site to download and install the VPN software. Only after this is configured are you able to access your applications. When you are done, you uninstall the VPN software from your friend's computer.

Ultimately, VPNs are a good solution if you have users that will use the same computer over and over to remotely connect to your Terminal Servers. VPNs are a not good solution if remote users will need to connect from many different random computers.

Instead of encrypting the entire network stream between the client and server with a VPN solution, it's possible to encrypt just the RDP session traffic itself, as shown in Figure 12.9.

One method that can be used to encrypt RDP traffic is Microsoft's native RDP encryption. Unlike other products, Microsoft's RDP session encryption is driven by the server's connection settings and not by the client. Microsoft currently has four different configurations available for the connection level. The four options listed below are found on the general tab of the RDP connection properties pages:

Since session encryption is configured at the connection level, people often wonder how the client knows which encryption type is being used.

The encryption level of the RDP session is negotiated when a connection is established. When the server is configured for a certain encryption level, it first determines if the connecting client supports this level. If so, a simple key negotiation takes place and the session is established via an encrypted pipe. If a user attempts to connect to a server with a level of encryption not supported by the client, the client connection is refused (Service Pack 1 for Windows 2003 changes this encrypted session negotiation. See www.brianmadden.com for details.).

The entire encryption process is transparent to the user. It does not add any overhead to the RDP network traffic, although it does add a touch of overhead to the server and client processor utilization as they encrypt and decrypt all RDP session data.

The only real disadvantage to using native encryption is that you need to open a nonstandard port (TCP port 3389, for the RDP session) on your firewall to receive the RDP traffic from outside clients. This topic will be covered in greater detail in the "Perimeter Security" section of this chapter.

Thinking back to Figure 12.7, you can see that there are several backend servers that your Terminal Servers need to communicate with. Since this book is not about securing server-to-server communication but instead about Terminal Server, we're going to continue focusing on securing that environment. The purpose of Figure 12.7 is to point out that a Terminal Servers is not a standalone machine, and requires access to many resources.

Fortunately, since back-end servers are usually all located on an internal network, encryption of that network is generally not as critical as encryption of the front-end network.

Network Perimeter Security / Firewall Configuration for Access from the Internet

In this section, we won't spend time talking about the importance of firewalls and why you need them. The truth is that most environments have them. Instead, we're going to focus on how firewalls relate to Terminal Servers. This leads to three questions:

Terminal Server Placement in Relation to the Firewall

When deciding where to put the Terminal Servers that will provide RDP access to applications across the Internet, there are three basic options:

Option 1. Terminal Servers outside the Firewall

Figure 12.10: A Terminal Server outside the firewall

This configuration is primarily used when Terminal Server applications are standalone (they do not need to access any data from the inside of the firewall).

Another point of worry is that Microsoft software is not known for being bulletproof. Very few organizations feel comfortable having unprotected Windows servers sitting on the Internet.

Advantages of Placing Terminal Servers Outside the Firewall

Disadvantages of Placing Terminal Servers Outside the Firewall

Option 2. Terminal Servers inside the Firewall

Most companies choose to place their Terminal Servers inside the firewall. By doing this, they are leveraging the true definition of the "firewall," as it will take the brunt of all Internet traffic and attacks.

Figure 12.11: A Terminal Server behind the firewall

This tends to be the most secure of all possible configurations because the only holes that need to be opened on the firewall are for RDP traffic to the Terminal Servers. Most of today's firewalls also offer stateful packet inspection capabilities, meaning that they can validate certain types of traffic going to the internal servers.

Advantages of Placing Terminal Servers Inside the Firewall

Disadvantages of Placing Terminal Servers Inside the Firewall

Option 3. Terminal Server in a DMZ 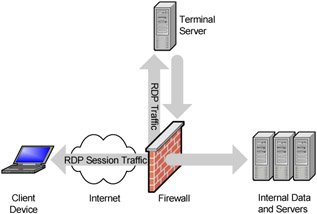 Advantages of Placing Terminal Servers in the DMZ

Disadvantages of Placing Terminal Servers in the DMZ

If you decide to put your MetaFrame XP server behind a firewall or in a DMZ, there are several TCP ports that must be configured on the firewall.

This list allows for basic communication between the end user and the Terminal Server through the firewall. If your Terminal Server is in a DMZ, the exact ports that need to be opened from the DMZ to the internal network can become a little more complicated. If your Terminal Server is a member of a domain, users will be required to authenticate. If the application being run on the server uses an SQL database on the internal network, port 1433 needs to be opened between this server and the SQL server. You'll also need to open ports for access to SMB shares, printers, and other network services and applications.

Network Address Translation at the Firewall 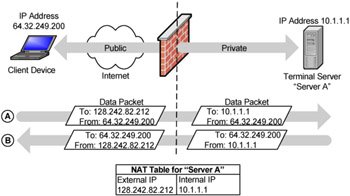 However, if the Terminal Server is part of a cluster that's using Microsoft's Session Directory to reconnect users to disconnected sessions, the IP address returned to the client when they reconnect (after the Session Directory finds their existing session on another server) will be the server's internal address, not the NAT'd external address. The client would need to connect to the load-balanced external IP address, but the session that was found would be based on internal address. In this case, the client's traffic won't go anywhere since the 10.1.1.1 address is not valid from the outside. (Chapter 7 focused on clusters and load-balancing in-depth.)

In order for the RDP client to connect and be successfully reconnected to a session on a Terminal Server behind a firewall using NAT, one of two statements must be true:

The first solution would require that at least one network card on the server has a valid, routable, external Internet IP address. This address would be used as the Session Directory adapter for reconnecting disconnected sessions. The caveat here is that you have to make this server publicly available with a port 3389 open which is less secure than being behind the NAT firewall.

In the second scenario, the hardware load balancer also acts as a pseudo-router. All load balanced traffic is routed through it. When a user disconnects from a Terminal Server using this configuration, a Session Directory token is returned to the client instead of the server's IP address. This token contains the IP address and credentials and is handed off to the load balancer at connection for routing. In this case, the server would not need a routable internet IP that could be accessed from the Internet, but instead would only require that the load balancer be able to connect to them.