MetaFrame XP is the first Citrix product that uses Citrix's Independent Management Architecture (IMA). The Citrix product literature describes IMA as if it's a magical solution that makes working with MetaFrame XP effortless. In the real world, MetaFrame XP's IMA consists of two components that we actually care about.

In MetaFrame XP, IMA does not replace the ICA protocol. The ICA protocol is still used for client-to-server user sessions. The IMA protocol is used for server-to-server communication in performing functions such as licensing and server load updates, all of which occur "behind the scenes." 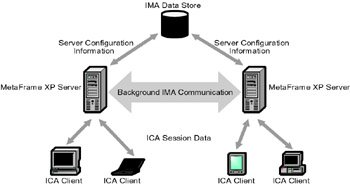