The ICA client software is the fundamental element allowing a computing device to attach to and run sessions off of a MetaFrame XP server. Without ICA client software installed, a device cannot run ICA sessions. From the MetaFrame XP server's perspective, it doesn't matter which ICA client platform is used or how a client connects to the server. This is actually the true beauty of MetaFrame XP. All users get the exact same application experience-regardless of their client platform.

Just about any type of client software in the world needs to take these two steps to connect to a server resource. For example, if we were talking about web browsers instead of ICA software, then our client software would be the web browser. The first step (the location of the server) is done by the user typing in the name of a website, such as www.citrix.com. The second step (establishing the session) is accomplished as the server sends web pages to the client via the HTTP protocol.

Let's observe these two steps from and ICA client perspective.

Throughout this chapter, we'll look at different ICA client platforms and how they can be configured to automatically connect to specific servers via specific protocols. However, any configuration that you set up will always use one of these six protocol combinations to find a server:

In many instances, users establish their ICA sessions with MetaFrame XP servers by specifying the name of a published application rather than the name of a specific server. This was discussed back in Chapter 4.

Figure 10.1: How the ICA client software obtains a list of available applications.

Once a MetaFrame XP server is located, the ICA client software is able to connect to it for the user session. This user session can take place over one of several protocols:

Figure 10.2 illustrates the process that occurs when a user chooses to launch an ICA session via a published application. 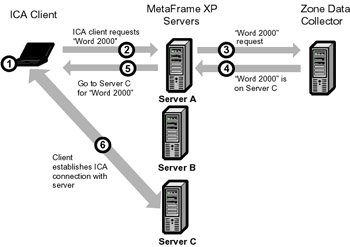