We mentioned in Chapter 1 that MetaFrame XP is an add-on product to either Microsoft Windows NT Server 4.0 Terminal Server Edition or Windows 2000 Server with Terminal Services running in Application Mode. (Throughout this book, we will refer to these two operating systems as "Terminal Server." This term is used to generically describe either platform.) MetaFrame XP is really no different than any standard Windows application because it requires an operating system to be installed in order to function.

Terminal Server is basically the same as the regular Windows Server operating system except that in Terminal Server, key components have been added or modified to provide support for multiple simultaneous users.

In case you're wondering, Microsoft Windows has always been a "multi-user" operating system in the sense that multiple users could be connected to a single server at any given time. However, these users were connected to file services or printer services on the servers. They ran their local Windows interfaces on their local computers. The server only supported one single desktop interface via the local keyboard, mouse, and monitor. The main difference with Terminal Server is that multiple users can each run their own Windows desktop sessions on the server, so Terminal Server is "multi-user" in the sense that it supports multiple desktop interfaces. Some people like to think of this as a "remote control" environment, except that the Terminal Server can support many different users "remote controlling" it at the same time with each user doing something different. Conceptually, this is similar to UNIX X.11 servers.

In order for Terminal Server to support multiple user sessions, some changes had to be made to it from the regular Microsoft Windows server software. There are two fundamental differences between Terminal Server and regular Windows Server:

In order to understand how the various Terminal Server components work together in the real world, let's look at what happens as a Terminal Server is booted and a user connects.

In environments where MetaFrame XP is not used, Terminal Server provides its own thin client protocol, called RDP, which allows other Windows clients to connect to the server and run remote sessions. However, the server startup and session connection processes are the same regardless of whether MetaFrame XP is used.

MetaFrame XP also plays a role in helping the end users find and connect to servers. However, after a user connects, they run a regular Terminal Services session with the Citrix ICA protocol.

Because MetaFrame XP is just an add-on product that provides the interface to end users, it is essentially nothing more than a set of services and management tools. MetaFrame XP does not break any of the existing Terminal Services components or interfaces. In fact, even though MetaFrame XP users connect via the Citrix ICA protocol, other Terminal Server users can still connect to the same server at the same time via the Microsoft RDP protocol.

The diagram we looked at on the previous page (Figure 2.1) shows MetaFrame XP as a self-contained box. Of course in the real world, nothing is quite that simple. Even though it only does two things, MetaFrame XP is made up of several different components, subsystems, and interfaces. A more complete diagram of the MetaFrame XP components is shown in Figure 2.2. Refer to that diagram as you read through the next few sections describing each of the components that make up MetaFrame XP. 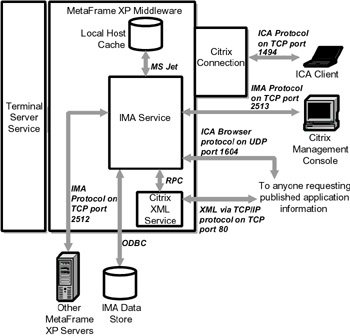 As you can see by its placement in Figure 2.2, the IMA Service is the central nervous system of MetaFrame XP. This service is responsible for just about everything MetaFrame-related, including tracking users, sessions, applications, licenses, and server load. It also communicates with other MetaFrame XP servers and administrators, and knows which users have permissions to access which applications. The IMA service runs on every MetaFrame XP server in your environment. If that service stops then your server is out of commission. The IMA service itself is made up of many components and subsystems. As you read this book, you will become more familiar with these various components.

If no connections were defined on a server, then no users would be able to connect, because there would be nothing to listen for and receive the user session connections. By default, the MetaFrame XP installation program automatically creates a connection for each protocol that is installed on the server when MetaFrame XP is installed.

Because each defined connection only supports one unique combination of a network protocol (TCP, IPX, async), a thin client protocol (ICA, RDP), and a network card, you can get very creative when you define connections. Imagine the following scenario: 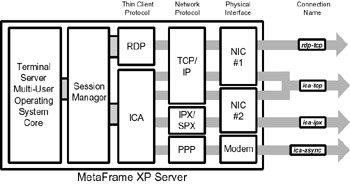 As you will see throughout this book, almost everything that you configure in MetaFrame XP environments is configured via the Citrix Management Console. However, the connections and their associated listeners are configured via a different utility called "Citrix Connection Configuration" (CCC). You can use CCC to configure options for Citrix ICA connections and Microsoft RDP connections, such as settings, permissions, and over what network card a connection is valid. Full connection details are available in Chapter 17.

In case you're wondering, the reason why connection settings are configured with their own utility instead of the Citrix Management Console is because each MetaFrame XP server maintains its own settings in its Windows registry. This is different from all other MetaFrame XP settings, which are maintained in a central database. This database (the "IMA Data Store") will be introduced in Chapter 3.

The properties that you configure for a connection affect all of the users for that connection, regardless of whether the users have conflicting options configured somewhere else, such as in their user account properties. For example, if you set the properties of a connection that is ICA on TCP/IP, bound to all network adapters to "disable" client drive mappings, then every user that connects via that protocol / network card combination (i.e. that connection) will be bound by those settings, even if the user has different settings in his profile or is an administrator.

In the real world, you can use the power of multiple connections to customize parameters for different users that connect in various methods. For example, if you are using asynchronous ICA dial-in capabilities, then you can customize that specific connection to disable sound support in an effort to save precious dial-in bandwidth. In this situation, your LAN users would use a separate connection (maybe ICA on TCP/IP or ICA on SPX) that did not have the same restrictions. This is detailed in Figure 2.4. 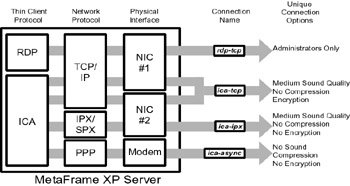 Of course you could install two network cards in your MetaFrame XP server and set up two different connections-one for each network card-each with different settings and restrictions. This is not always practical because you would then need two network cards and two IP addresses for each server. Fortunately, there are other ways to address needed security, as detailed in Chapter 15 of this book.