A. The Future of Citrix in a Microsoft .NET World

As the name implies, .NET is a strategy, not a product. It is the strategy that describes how Microsoft components will exist and work together using the Internet, web services, and many different types of client devices. This strategy will be implemented through the release and sale of several Microsoft products. Some of them are out there today. Others are just around the corner.

Let's take a look at some of the main components that make up Microsoft's .NET strategy.

As with almost everything in the computer world, these new .NET applications require that client devices have new client software in order to access them. For .NET client devices, there are three requirements.

Microsoft's vision is that the operating system and client device will be removed from the application access equation, so that everything is abstracted up a level to the .NET redistributable framework. This framework is available as a free download for users (~20MB) and built-in to future versions of Microsoft operating systems. There is also be a "compact" version of the .NET framework that installs onto things like PDAs, smart phones, set top boxes, and the X-Box.

Historically, application development has only been half the battle. The other half was trying to figure out how to get a newly developed application deployed to your users. For web applications, deployment was simple. All you had to do was copy your files to your web server and send out an email that gave everyone the URL for your application. However, for developers that chose to create applications with full, rich user interfaces, the application (and its related DLLs and supporting files) had to be physically installed on every client device.

The Concept of Web Services

A large part of Microsoft's .NET strategy is XML-based web services. These web services act as the building blocks for .NET applications, allowing them to be distributed and interact with other applications via XML and the Internet. This common service interaction allows any program written in any language running on any computer, to be able to interact with any other. For example, in the web shopping application discussed previously, one company might create a XML shipping service that all of the other 10,000 applications use, with each application sending and receiving data to the shipping module via XML files sent over the Internet.

The Future of .NET

Microsoft executives have said again and again that they are "betting the company" on their .NET strategy. They understand that the key to .NET's success will be getting the application developers to accept and embrace it. However, it will probably take a year or two before the critical mass of new applications are developed on the .NET platform.

Based on this overview, it's easy to see the advantages and disadvantages of .NET applications.

How does .NET Relate to MetaFrame?

Based on this high-level overview of Microsoft's .NET strategy and your understanding of MetaFrame XP, you can easily see that there are a lot of similarities between the two.

Similarities Between .NET and MetaFrame Architectures

When you look out a few years, you can see that the whole world is moving towards "smart" XML-enabled applications, and that MetaFrame is doomed because it focuses on legacy Windows applications.

The Evolution of Citrix

Even though Citrix began life as a company that provides remote access to Windows applications, they are looking forward to a bright future.

B. Acronyms Used in this Book 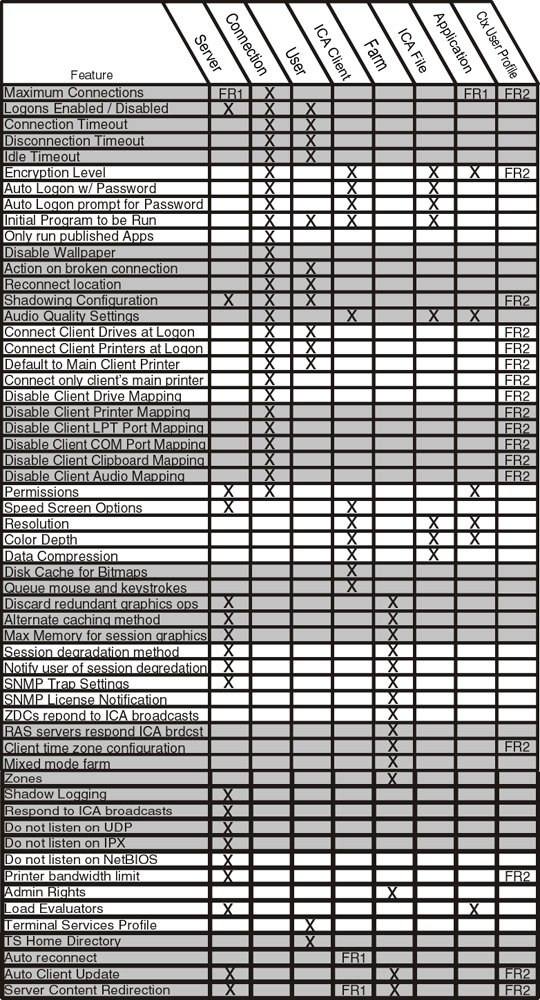 F. Websites Referenced in this Book